A COMMUNITY SUCCESS FOR 38 YEARS

The Habitations Dégelis Inc. provides seniors and families with 110 rental units at affordable prices. The community began in 1978 with a housing project called the Lions Block, named in honour of the group that instigated this wonderful success story.

The local Lions Club wanted to contribute to the well-being of citizens and is still active in pursuit of this common goal, since its members form the majority of the non-profit corporation’s board of directors. “There was a shortage of housing in Dégelis. That’s when the Lions Club started its commitment. In 2016, the needs are still there, it’s not over yet,” said Jean-Yves Lavoie, of the non-profit group. 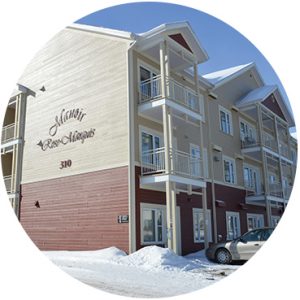 The larger community of 3,500 residents reflects the spirit of solidarity that is the foundation of the Habitations Dégelis Inc. corporation. Thus, over the years its achievements relied on the collaboration of the city of Dégelis and the Caisse populaire Desjardins des Trois-Lacs. This also could not have happened without the participation of the Canadian Mortgage and Housing Corporation (CMHC) and the Société d’habitation du Québec (SHQ).

“We respond to the needs of small families, individuals and seniors, particularly of people with low income; the Témiscouata regional county is one of the poorest in Quebec. Moreover, this allows people to remain in their communities, near their families”
– Jean-Yves Lavoie, president

The first phase of construction was completed in 1979 and provided 24 dwellings located at 101 East 7th Street. In 1983, the second phase contributed to the growth of Habitations Dégelis with the addition of three blocks of four dwellings known as Place piste cyclable. In 1985, two other buildings — Place du Longeron — accommodated even more families and single occupants.

Following a survey conducted by the city of Dégelis and the Economic Development Corporation in the early 2000s, the directors of the corporation decide to go forward with the Manoir Rose-Marquis project.

“The most glaring needs were from independent retirees who wanted to live out this period of their life in a comfortable and safe place”
– Diane Dubé, Habitations Dégelis coordinator

The first 17 Manoir Rose-Marquis units were completed in 2004. A second phase of 21 new homes, the Pavillon Desjardins, was fully occupied by July 2012. 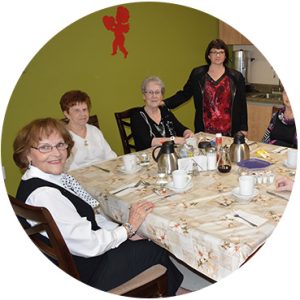 Twenty-four social housing units on Morneau Ave. joined the community in December 2014. “Beautiful, new two-storey housing! In fact, the occupants live in townhouses,” explained Dubé. With the addition of these units, the Habitations Dégelis Inc. now manage 72 homes for families, in addition to 38 homes for retirees in the Manoir Rose-Marquis.

“On Morneau Ave., we see that almost all of the housing was occupied in the first year by newcomers to Dégelis. That’s how the corporation contributes to development of the housing stock with quality homes, all while taking the needs of the community into account,” the coordinator added. 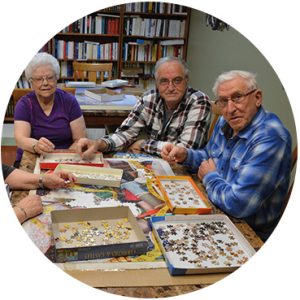 The amount that a person devotes to his rent makes all the difference: 20 out of 48 residents at the Manoir Rose-Marquis benefit from the Quebec rent supplement program, which
contributes to improving their quality of life. The new 41/2-room units on Morneau Ave. are rented for $500 a month.
And the rent in the 30-year-old Lions Block is $404.

The average age at the Manoir Rose-Marquis is 82. The social impact of a non-profit housing needs no introduction in Dégelis.

The Habitations Dégelis Inc. corporation also has a significant economic impact by providing, among other benefits, employment for 13 people including eight fulltime workers. In addition, investments made with its partners were worth $14 million in 2016. The task is far from over for administrators, however.

“It is not over, the needs are still there.
We’re thinking about a third phase for the Manoir Rose-Marquis”
– Jean-Yves Lavoie, president