A DECADE OF GROWTH

Based in Sutton, the La Villa des Monts retirement home will celebrate its 10th anniversary this summer.

“It’s not too big, it’s just right,”, said Marie-Jeanne Lefebvre, when asked about her assessment of the Villa des Monts, where she has lived for almost 10 years. The dean of the residence added that “it’s community-minded and personalized. The atmosphere is good with neighbours and in the dining room.”

Marie-Jeanne toured the establishment with us and Ville des Monts chairperson Alexandrine Poissant. Both are former teachers from Sutton. Although Marie-Jeanne mourns the recent loss of her friends Suzanne and Rolande, who also lived here, she laughs easily with Alexandrine.

Donald Davidson, is a 91-year-old sculptor from Waterloo, in the Eastern Townships. With a sparkle in his eye, he likes to joke around and to create. Donald came here two years ago with his wife, Dorothy Harrington, after a career in the United States, because of its close links with the Sutton artistic community.

Even more importantly, “we have the right to have our cat
(Desmond Tutu, 16)” 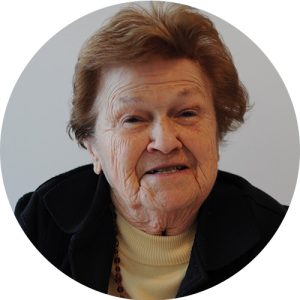 Alice O’Brien Bidwell will be marking her 8th year at the Villa
des Monts in October. She lived her entire life on Western Road, where the Villa is also located. “I just had to change the number,” she joked. She said she loves the fact that residents here speak French. As in Sutton itself, the anglophone and francophone communities are well represented at the Villa des Monts. Discussions take place in both languages, says the president of the institution, ensuring everyone gets along. The occupancy priority here goes to the citizens of Sutton and Abercorn or their parents.

The atmosphere
People are relaxed, cheerful and caring. One of the cooks, Robert Ménard, remembered a former resident, Father Lapalme, who, when asked about his health, replied: “It’s great, but I’m falling apart!”>/em≤

Robert himself has a good sense of humour. He made a little amateur film where the guests come in oneby- one to tell him that his food is horrible — which is fortunately a lie. Donald and Alice praise the quality of the fare. At lunch or dinner, residents have a choice between two appetizing main courses. 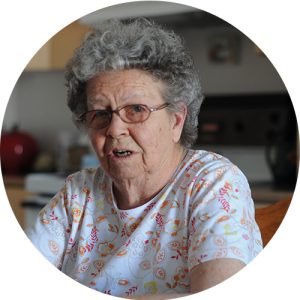 Alexandrine said her friend Marie-Jeanne Lefebvre was the inspiration behind the Villa des Monts. “She told me she was having trouble getting services in Sutton, like snow shovelling or lawn mowing.” At the time, the closest seniors homes were in Cowansville and Knowlton.

Alexandrine then pondered where she herself would go when she got older. And that’s where the dream of a retirement home was born. The idea was well received during a consultation with the La Pommeraie CLSC health centre and the Sutton mayor at the time, Winston Bresee.

The Villa project was incorporated in December 2003. “As is usual in boards of directors,” Alexandrine joked, “the person who speaks most was appointed chairperson.” She admitted that, at time, she had no idea how much involvement the adventure would require.

the building
The Villa was built in the middle of the village, on a vacant lot that had once hosted the Darrah factory, which manufactured
bowling pins, hockey sticks and ax handles.
The site is within easy walking range of all of the shops and services as well as a community garden and a bike path, which is now maintained in winter as well thanks to the efforts of the Villa des Monts directors.

“I see beautiful sunsets in my room”
– Marie-Jeanne Lefebvre, tenant

Donald and Alice also stressed the beauty of the surroundings.

The building design is the work of Ste. Julie resident Michelle Descartes. At the request of Ms. Poissant, she opted for an
architectural aesthetic common to the Townships, and located the kitchen at the end of the building so that cooking odours would be isolated.

An office provided free to the CLSC allows home care aides the opportunity to maximize care to Villa residents. Otherwise, in normal circumstances there is neither an attendant nor a nurse on site. Bathrooms and bedrooms are equipped with an
emergency call service. 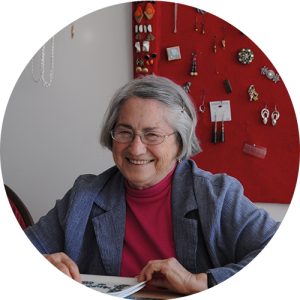 Activities
The activities at the Villa des Monts are similar to those found in senior residences throughout Quebec. “The puzzles are very popular,” Poissant noted. “In the games room, people can play indoor pétanque, beanbag toss, or Wii bowling. Outside there’s a pétanque court. People go to bingo once a week.”

The Villa social club also does its part for leisure activities.

“We give them a small budget and they run self-financing activities,
such as garage sales, which can bring in up to $600”

Every year in August the residents invite family, friends and neighbours to a big picnic. As well, a local choir performs for residents three times a year.