A CONCRETE EXAMPLE OF CHANGE INITIATED BY INDIVIDUALS FROM THE COMMUNITY

This is the story of a struggle that lasted nearly 25 years for some tenants, who now live in a beautiful apartment on rue des Ateliers, close to the Rosemont métro and Marc-Favreau library.

A long struggle that led to the creation of community housing. “It wasn’t the artists who lived there, but the city blue-collars who worked in the mechanical workshops before they were relocated that came up with the street name Ateliers,” recounted one tenant with a grin.

“The committee brought together neighbourhood residents and got us to play with
Lego blocks, that’s how we made the project development plan”
– Lucille Perron, one of the first activists and tenants

Thus was born a great mobilizations of citizens in Montreal which created, among other things, the Un toit pour tous (A roof for all) non-profit housing group. 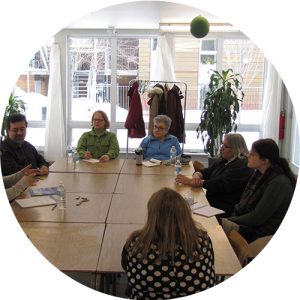 In 1985, the Petite-Patrie housing development round table became the engine behind the project on the municipal workshop site, demanding the construction of 1,000 units. Several obstacles arose along the way, but committee members
never let up: the relocation of workshops was postponed two times and the land had to be decontaminated, which meant cleanup funding had to be found before you could even think about building. Ultimately, the non-profit turned to the city for funding, otherwise the vast project would never have been possible.

Several citizen mobilization campaigns took place during all these years, ranging from the mailing of 1,000 postcards to politicians, signed by the residents of the neighbourhood, the occupation of politicians’ offices, public assemblies, solidarity campaigns and marches calling for community housing in the neighbourhood, participation in political debates, the publication of briefing documents, the construction of an interactive model project on the site, etc. These are just some examples of the sustained mobilization of the Petite-Patrie housing-development
round table.

The partnership between the Un toit pour tous non-profit, the round table and the technical resource group ensured the project came to life. 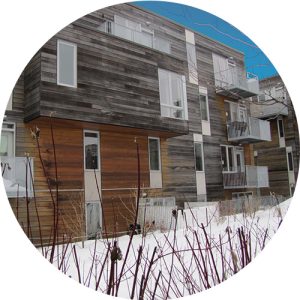 Finally, in June 2010 the first tenants, including several members of the
committee of applicants for social housing in La Petite-Patrie, entered their new homes that had been won through constant mobilization

Several residents had been involved in the project for over 25 years, never giving up despite the obstacles. The first real-estate project initiated by Un toit pour tous is called “Les Habitations des Ateliers verts.”.

“We maintain the land,
we recycle, we clear snow, we’re home”
– Lucille Perron, one of the first activists and tenants

The project has a large room used primarily for meetings of the board and committees of Un toit pour tous and by other community groups in the area.

The project is a concrete example of social change initiated by individuals from the community, who go on to become activists, then agents of social progress.